Archive | The Soupista RSS for this section
January 21, 2011

My back porch window was iced over this morning in the most delicate and lovely pattern, like tall dandelions in fluffy fields. Fog rolled out from under cars in rows on the freeway, and rose up off of the lake along Lake Shore Drive. How visually pleasing winter can be! I passed the bank’s weather/time display this morning on my way into work, and it said that the temperature was -2. My first thought was not, “What crap!”, but “That can’t be right, it’s not that cold!” How’s that for Chicago indoctrination?

Below, I’m posting a long-overdue Soupista post from Jen. Enjoy! And stay warm! 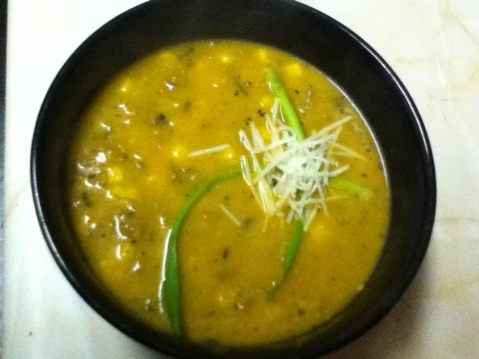 Some people say that necessity is the mother of invention. Tonight, I think laziness was creation’s matriarch. As in, I was too lazy to visit the store. Which is literally two blocks away.

Not wanting to leave the comfort of my fuzzy ducky socks, I found myself investigating the fridge like an overzealous CSI tech (wearing fuzzy ducky socks), dusting every inch of Gladware for possible dinner suspects.

Unfortunately, the forensic approach to cooking, like so many partial fingerprints, doesn’t always leave you much to go on. My “investigation” turned up: one sort of big butternut squash, two cups of cooked wild rice, and a questionable package of Italian sausage. Oh the possibilities.

Since I like soup anyway (and Kate, my cooking muse, suggested it), I decided to turn these ragtag ingredients into a sort of liquid-based dish that could be eaten with a spoon. Besides the main culprits, I obtained (by totally legal methods) the usual suspects like chicken stock, garlic, onions, canned corn, and—why the hell not—half & half.

As I saw the ingredients lined up on my counter, and after a thorough sausage sniff test, I knew this wasn’t going to be any old soup or stew. It was going to be a chowder. A butternut chowder. I was getting excited to start, but also felt a bit worried that my creation would turn out as something more aptly named “Butt-nut Chowder”, and my roommates just wouldn’t appreciate that.

It was slow going at first. Fumbling around with the ingredients, I felt a bit like Reed Farrington in Cooking with Gerry (http://www.youtube.com/watch?v=GGUybwNhFVU&feature=related). But after a few shakes of spice here and a half cup of cream there, I finally had my answer: Ms. Soupista. In the Kitchen. With the Immersion Blender.

The chowder turned out well. The world was safe again. And with this hearty number, the fuzzy socks were warm as ever. 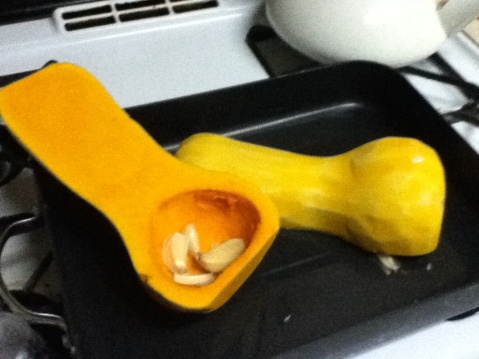 In a roasting pan, drizzle peeled and gutted squash with olive oil and whatever spices you want. Pour in about 1 c. of chicken stock. Roast squash and garlic for about 45 minutes or until tender. *I positioned the garlic in the butternut cavity, to try and infuse it with more garlic flavor—it seemed to work well.

While squash is cooking, sweat onions and red pepper in sauce pan. Add sausage and cook until brown. Drain excess fat. Return to heat and add about 1–1 1/2 c. rice to meat mixture, stirring until thoroughly heated.

Cut roasted squash into chunks. Remove skins from garlic cloves. Place both in stock pot with 4 C chicken stock. Blend with immersion blender until smooth. Add meat and corn to squash mixture. Let simmer on low heat for 15 minutes. Stir in half & half or heavy cream. Allow to sit for 5 minutes before serving. Garnish with shredded cheese, if desired.

I’ve been home sick for the last four days, and I missed most of the stunningly gorgeous, unseasonable weather that Chicago experienced while I was hiding out in my sick cave. I was greeted on my first day back at work with thunderstorms. Sigh. At least I should have my taste buds back soon, and can move on from PB&J and oatmeal. Anyways, the weather reference is a bit outdated in Jen’s post here, but this is my fault, not hers. Just use this as an excuse to close your eyes and transport yourself back to the mild, sunny weekend (maybe with a cup of this lovely soup in hand!). 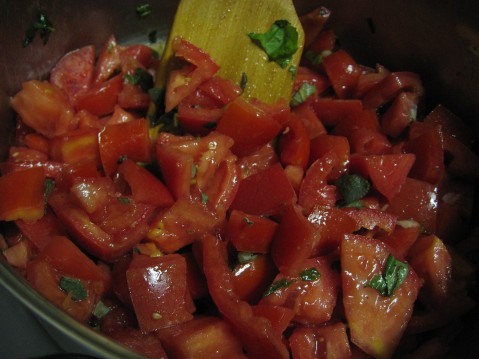 I’m not really sure what is going on outside. This so called “Fall” is really throwing a wrench in my warm, cozy soup plans. Seriously, weather. Who wants to eat a thick vegetable slurry when the kitchen is a sweaty, unseasonably warm sauna ?

As a compromise between the offerings of summer and the heartiness of fall, I decided to make my Pappa al Pomodoro, which is just a fancy way of saying “tomato soup with bread mush.” It’s a perfect dish to make if you’ve got tons of tomatoes—fresh or canned—and stale or crusty bread. Really, you can’t mess it up. I usually make big batches of this, because I can’t get enough of it–it’s like a warm tomato hug.

This soup/stew is made a ton of different ways. My twist is that I like to put garlic bread in it, instead of just plain bread. And I like to keep the baguette slices whole instead of crushing them up. The best thing about cooking garlic bread and tomato soup at the same time is that that apartment smells like a back rub given by a jacuzzi; in a word, heavenly.

I also made a banana-y bread. Although tomatoes do not necessarily pair well with bananas, one of my roommates used some of our (seemingly bottomless) orchard apples to make some killer applesauce last week. Sadly, the poor sauce just has been sitting in the fridge. I mixed it with some cheap, brown bananas (19 cents/lb, baby!) for something I creatively named “Banana Applesauce Bread.” Behold my naming prowess! Anyway, the result was a delicious butter-less, oil-less quick bread that is moist and (sort of) healthy.

Regardless of the odd assortment of food, the whole “family” enjoyed the food and the entire meal came in under $15.

Editor’s note: Dear Soupista, Please provide us with the recipe for your banana-applesauce bread. We want to make it, too, and it sounds divine! So does this soup, by the way.

In a soup pot, saute garlic and onion in oil for 1-2 minutes. Add sage and basil. Stir until fragrant. Add chopped tomatoes and about a cup of chicken stock. Cover and stew for 10 min. Add the remaining stock and simmer, occasionally smashing with spoon, for 20 minutes. Remove from heat and blend slightly with immersion blender until mostly smooth with some chunks.

For bread: Mix softened butter with garlic and herbs in a small bowl. Put bread slices on baking sheet and spread garlic butter on top. Sprinkle with cheese. Bake at 300 F for 20 minutes.

To serve: Place 2-3 pieces of garlic bread in a shallow bowl. Top with soup and cheese. Garnish with basil or sage leaves. Enjoy. 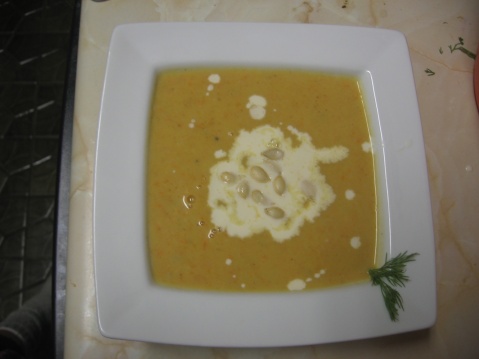 My friend Jen is a world-traveling, ethnography-studying, Chinese-speaking, event-planning guru. She helps out in my office and helps keep me sane. She also happens to be an amazing cook who is good at feeding hordes of hungry grad students. I’m often lucky enough to be the recipient of her baking prowess (e.g., spice bread, a peanut butter-chocolate concoction called something like gobbeldy gook). But her skills extend far beyond baking: combining her master-level organizing ability with her love of cooking, she’s put together a rotating dinner club that has been feeding hungry grad students for over a year. This autumn, she’s given herself the challenge of creating a soup a week. We’ll be lucky enough to read about the process, and acquire some delicious recipes perfectly suited for the crisper weather that’s approaching. 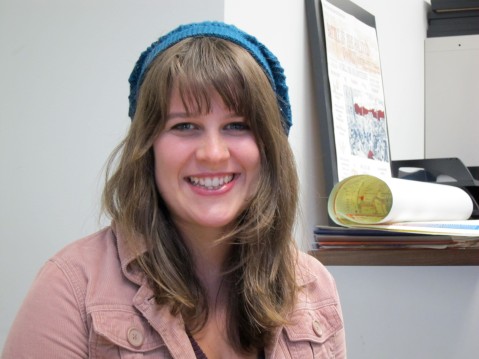 The Soupista:
Even though we Chicagoans fought so hard for summer this year, the leaves are turning. The air is crisping up. Hats are emerging from their closet hibernation. It seems Old Humbug Autumn has finally picked his front and center seat at bingo and is staying there, dammit. As much as the autumn makes us Windy City wayfarers wary of the crippling weather to come, along with the begrudgingly conceding sigh of fall also comes the best of the season’s edible bounty.

Tart, orchard-fresh apples. Lumpy little pumpkins. Squash, gourds, the beginning of winter greens. Soup. Ah, soup. There are so many reasons for loving soup. And if you, reader, are a frequenter of this or any food blog, then there is no reason for me to stew about this oh-so-beloved food form. But do let me, in my best Campbell’s impression, condense it for you: Soup can be reasonably healthy, seasonal, filling, and cheap.

I live in an apartment with four other people. We’re graduate students, so naturally we’re poor and starving. We originally met when I organized a dinner club with about ten other people. After some very humble beginnings and a nightly charge of making enough food for a hungry dozen, we’re now down to five in an off-campus apartment. We’ve cooked together almost every day for a year now. Aw. Since our group’s inception, friendships and an even deeper love of food have blossomed. And the stakes, I admit it, have been raised. We take turns cooking each night. I do Mondays and have decided to throw down my gazpacho soaked gauntlet (aka my oven mitt) and challenge myself to a quarter-long weekly souping; that is ten weeks of creating one concoction that is made with fresh, inexpensive ingredients; stands alone as the main part of a complete meal; and doesn’t make roommates so ticked off at “Soup? AGAIN?” that they bludgeon this aspiring soupista to death with her own ladle.

My main goals are to keep the quality up and the price down—under $20 for the total meal per week. This really isn’t too hard to do. Thankfully, I live near an (amazing and) cheap produce store and luckily don’t have a taste for things like truffle oil or diamond paste, or whatever the kids are rubbing on their solid gold lobsters these days.

In honor of fall and leaves and all that crap, I decided to start this week with Pumpkin Soup. We all went to an orchard over the weekend and hand-picked apples—one of which is used in this recipe. We also got, like, literally two dozen pumpkin donuts—only one of which is still hanging around.

Anyway. This simple soup is pulverized with an immersion blender until smooth and is only made more delicious with the addition of heavy cream. Yum. It was great because I got to throw in the orchard apple and bought the most adorable little pumpkin that I had ever seen…which I then hacked into bits.

I served this with crusty sourdough and a herb/green salad. Everyone liked it. And if not, they were good friends and kept their mouths shut.

Preheat oven to 400 degrees. Place cut up vegetables in baking dish. Sprinkle with garam masala or allspice. Pour in about ¼ C chicken stock and stir with spoon to evenly coat vegetables with spices. Roast, covered, for 20-30 minutes until carrot and potato are tender, but not blackened.

Transfer vegetables to dutch oven or large soup pot. Pour in remainder of chicken stock. Pulverzie with an immersion hand blender (or food processor) until thick and smooth. Stir in spices to taste. Let simmer on low heat for 15-20 minutes. Add cream, stir, and let simmer for 5 more minutes. Serve with a dollop of extra cream and roasted seeds for garnish. Enjoy!